Bhuvneshwar Kumar, like the other wily Kumar, Praveen, comes from Meerut, a northern Indian town known for – among other things – the industrial production of sports goods, most famously those under the brand SG. No wonder then that once thrown the new SG ball, Bhuvneshwar can make it hoop around corners, mostly back into the right-hand batsman but he gets it to hold its line often enough to be a genuine threat. Like the other Kumar, though, Bhuvneshwar operates at a middling pace of early 130s, but India weren’t spoilt enough for choices to deny him an international debut season at the age of 22, in late 2012. Bhuvneshwar said a roaring hello to international cricket. In his first international over, he bowled Nasir Jamshed; with his first ODI delivery, he bowled Mohammad Hafeez; and in his first Test series he played a part in India’s first whitewash of a four-Test series. Apart from the swing, Bhuvneshwar’s control of it and his cricketing smartness stand out. It stood out the time when he, as a 19-year-old, worked Sachin Tendulkar over for his first first-class duck in Indian domestic cricket. The cricketing smartness showed with the bat too when he scored 128 batting at No. 8, winning a Duleep Trophy semi-final in 2012-13, just before his selection for India.Bhuvneshwar was one of the lone bright spots in an otherwise wretched tour of England, taking 19 wickets at 26.63, an Indian record for most wickets against England in a Test series. He was dragged down by injury in Australia and played only one game in the 2015 World Cup.

B Kumar AKA Bhuvneshwar Kumar, Plays for National Cricket Team of India. And he plays role as Bowler in the team.

Kumar plays for Uttar Pradesh in domestic cricket. He has also played for Central Zone in the Duleep Trophy.Kumar made his first-class debut at the age of 17 against Bengal

In the 2nd semi-final against North Zone, Kumar took one wicket with an economy rate of 3.03. Although being a lower-order batsman, he scored 128 off 312 balls surpassing all the scores of his teammates and maintained a partnership with four batsmen. He was consequently awarded the Man of the match. In the 2008/09 Ranji Trophy final, he became the first bowler to dismiss Sachin Tendulkar, rated as India’s greatest batsman, for a duck in first-class cricket.

Here the Bhuvneshwar Kumar’s, Runs Average, Bowling and Fielding Averages are Tabulated Below.

• Has bowled the batsman out to take his first wicket in Test, ODI, and T20 match.
• The only bowler to dismiss Sachin Tendulkar for a duck in First-Class Cricket.
• The record for the most economical figures in a T20 international cricket match against West Indies in 2014, for conceding 3 runs from 3 overs.

• The record for the second-most expensive ODI spell in India against South Africa in 2015, for conceding 3 runs from 3 overs. 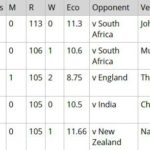 In 2012, with an incredible start to his ODI career against Pakistan in a T20 match where he took 4 wickets for 9 runs in 4 overs.

Know More About Other Country Players :

We TheTimepass, is a fun and entertainment